It is with a very, very heavy heart that I am writing to you about the passing of a wonderful friend, dedicated researcher, caring physician, and a founding member of the ISCL, Eric Vonderheid.

Eric was truly dedicated to his patients with cutaneous lymphoma, to his colleagues and friends around the world. He was great mentor, thoughtful and kind, with a great sense of humor. His heart was bigger than life, he kept all of us in it. His contributions to the field of cutaneous lymphomas are vast – from classification of erythodermic mycosis fungoides to Sezary syndrome to establishing skin directed therapies, encompassing the whole spectrum of cutaneous lymphomas and their therapies.

He was former Professor of Dermatology and Oncology at Johns Hopkins University and died after a long struggle with prostate cancer on Oct. 24, 2020. He will be deeply missed.

Eric Carl Vonderheid, M.D., former Professor of Dermatology and Oncology at Johns Hopkins University between 2002 and 2007, died after a long struggle with prostate cancer on 10/24/2020. He was born on 11/3/1942, the only son of Carl G. Vonderheid, Jr., M.D. and Thelma Shaw Vonderheid, and raised in New Kensington, PA. Eric is survived by his loving wife, Kathleen, devoted children Erica Williams of Lakewood, CO and Carl Vonderheid of Blackstone, MA, his sister Nancy Hutchinson, and his grandson Asher Williams. Eric was preceded in death by his wife, Mary Elizabeth Vonderheid.

Eric received his undergraduate education at the Pennsylvania State University and medical degree from Temple University School of Medicine.  Eric served in the US Navy for 2 years before starting his dermatology career at the Skin and Cancer Hospital, Temple University and later Hahnemann University in Philadelphia. His research was focused on the study and treatment of lymphomas of the skin. Eric was a founding member of the International Society for Cutaneous Lymphomas.

Eric had a wonderful sense of humor, and a love for life. He enjoyed golf, duplicate bridge and travel and other outings with his wife.

On September 19, 2020, our beloved colleague and friend, Prof. Dr. Wolfram Sterry, passed away. In him we lost one of the most passionate clinicians and researchers, who was prominent the field of cutaneous lymphoma for more than 40 years.

Prof. Sterry was born on March 5, 1949 in Marbach, Germany. He studied medicine at the Univ. of Cologne from 1972-1978. In Cologne he met his first teacher in dermatology, Prof. K. Steigleder, with whom he completed his residency in dermatology from 1978-1982. In 1984 he moved to the Univ. of Kiel to become vice chairman at the Dept. of Dermatol. with Prof. Dr. E. Christophers. At the age of 42 he became Chairman of the Dept. of Dermatol.at the university in Ulm. In 1994 he was appointed Chairman of the Dept. of Dermatol. at the Charite in Berlin. In Berlin he developed the Department of Dermatology at the Charité with enormous efforts and vision into one of the most renowned departments of the world.

Prof. Sterry was as a well-respected clinician, and held numerous high-ranking national and international positions in the world of dermatology. Briefly, he was President of the German Dermatologic Society, President of the ESDR, and President of the ILDS, where he contributed with decisive developments in each of these societies.

He was an essential part of the EORTC Cutaneous Lymphoma group, where he served as the president from 1992-1996 and contributed to the absolutely practice-changing EORTC-WHO classification system published in 1997. With his co-worker Peter Walden, he founded in 1997 the International Symposium of Biology and Immunology of Cutaneous Lymphoma (ISBICL), a high-level scientific conference, with focus on basic and translational research. This was the first regular meeting - every three years - of basic researchers and clinicians from around the world, and was frequently the initiator of friendly and interdisciplinary collaborations. In February, 2013 Prof. Sterry organized and chaired the 6th ISBICL and made the 2nd WCCL in Berlin to a remarkable conference, although at this time he was already fighting for his own health.

Prof. Sterry was an enthusiastic clinician, for whom the patient was always the main focus. He indeed lived the approach, "from bench to bedside.“ The Monday evening meetings, in which he brought the whole cutaneous lymphoma team, including clinicians, dermatopathologists, and basic researcher and PhD students together to examine and discuss cutaneous lymphoma patients, will remain unforgettable by all who had the privilege to participate. In his pleasant and comfortable manner, he demonstrated to us the suffering and need of the patients, and stimulated us to give our best in clinic and research.

Prof. Sterry was a visionary and open-minded leader and teacher. His innate discipline and appreciation for life were impressive and did not diminish despite fighting the vicious disease to which he finally succumbed

I am personally grateful to have had the good fortune of having Prof. Wolfram Sterry as an academic teacher and mentor. I appreciated his enthusiasm and determination for science, as well as his inspiring, respectful and friendly approach to people.

He will be dearly missed! Our heartfelt condolences go to his beloved wife Dr. Gerda Sterry, his family and friends from over the world. 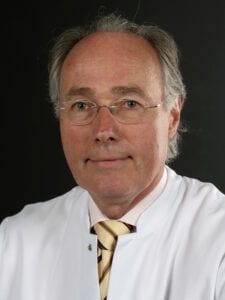 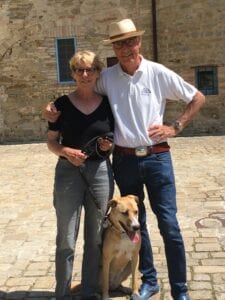